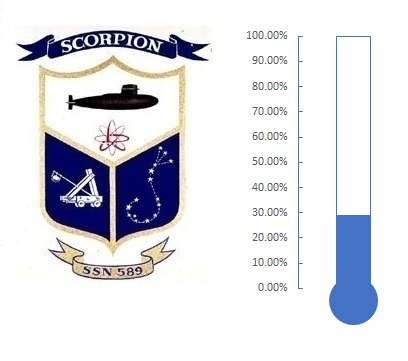 On May 22, 1968, USS Scorpion (SSN 589) was lost on its way home to Norfolk after a Mediterranean deployment during the Cold War. All ninety-nine men aboard perished in the incident. In anticipation of the 55th anniversary, a lead donation was made to establish the USS Scorpion (SSN 589) Scholarship – a named Dolphin Scholarship open to qualified children and spouses of the members or former members of the Submarine Force or those who have served in submarine support activities.

A lead gift of $17,500 made by a donor, who wishes to remain anonymous, kicks off the USS Scorpion (SSN 589) Scholarship endowment drive. The donor has pledged to match donations up to $35,000 to fully endow the scholarship at $87,500. The goal is to fund the scholarship while marking the 55th anniversary of tragedy on May 22, 2023.

Although no donation is too small or too large, in honor of those who served on Scorpion, the following donation levels listed below have been established:

Donations may be made HERE or mailed to the Dolphin Scholarship Foundation office at 4966 Euclid Rd Suite 109, Virginia Beach, VA 23462. Thank you for honoring the men standing watch on eternal patrol on USS Scorpion.

Other Ways to Contribute

Here’s an idea: donate to Dolphin Scholarship Foundation effortlessly, often—and for free! If you want first dibs on deals like Best Buy Coupons, or love saving cash at stores like JC Penney and Sears, use Giving Assistant. As much as 30% of your purchase price at 1800+ popular retailers are turned into valuable donations for the Dolphin Scholarship Foundation. Sign up today to find out how your everyday shopping can make a difference for us! 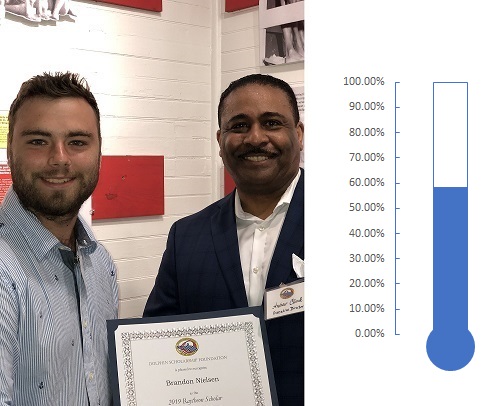 With only 34% of applicants selected, earning the title of Dolphin Scholar is a remarkable achievement. Dolphin Scholars go on to become outstanding members of their communities and professions. This year, over six decades of former and current scholars are invited to join forces and bestow the honor of Dolphin Scholar on one more highly qualified student. These funds will be used to award a Haines Society Scholarship, named after our first scholar in 1960, John Haines. It will be awarded to a future Dolphin Scholar, making the cost burden of higher education a little lighter as they pursue their academic goals. If you would like to contribute, please click HERE or mail a check to Dolphin Scholarship Foundation, 4966 Euclid Rd, Suite 109, Virginia Beach, VA 23462. Don’t forget to give us an update on your life – professional or personal. We love reconnecting with past scholars and hearing your success stories!

We Want to Hear From You!

DSF is constantly striving to improve the level of customer service that we provide to our supporters and scholars. We appreciate you taking the time to complete this short survey. Your feedback is extremely valuable. All information is anonymous unless contact information is provided.

AmazonSmile is a simple and automatic way to support the Dolphin Scholarship Foundation every time you shop and at no cost to you. When you shop at smile.amazon.com, you’ll find the exact same low prices, vast selection and convenient shopping experience as Amazon.com, with the added bonus that Amazon will donate a portion of the purchase to us.

Thank you to all our Supporters and Corporate Donors!